Last year, I had proclaimed that we were going to take a family vacation out west to see some of the country. We had taken our kids on great vacations over the years, but all of them were on the East Coast either in New England, the Outer Banks, or Florida. After some convincing, (yes, we promised, we would go back to the beach or a lake next year) – we acquired a gigantic map of the US, and rolled it out on our living room floor during a January snowstorm. We all took turns marking places on the map that we wanted to see. For me, Mount Rushmore and Yellowstone National Park were choice destinations. Joseph also liked the idea of Mount Rushmore but was otherwise non committal. Shannon was really interested in Yellowstone, but then lamented, “So many of my favorite books take place around the Grand Canyon, so I really want to see that!”

Joe, who loves the road less traveled, marked much more obscure things on the map, like World’s Largest Ball of Twine, and CATFISH. The ball of twine is somewhere near Minneapolis, and I still am not sure what “Catfish” he wanted to see between Minnesota and North Dakota, because I didn’t actually ask. 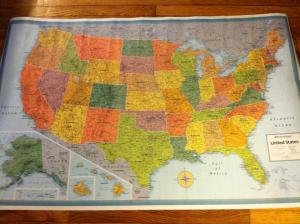 For a few months, we’d bounce ideas off each other during dinner conversations. Other places came up – the world’s largest potato, cadilac ranch, Santa Fe, the Redwood Forest in California. We had other suggestions from Facebook – Grand Tetons, Seattle, Colorado, Corn Palace. As winter melted into spring, I began researching our options for flights, and this is when we came to realize that trying to see Mount Rushmore and Yellowstone in the same trip, though it’s only a few fingers on this large map, was going to be days and days of driving. While our kids have done long drives before and are pretty good travelers, we didn’t want to spend the entire trip in the car.

The route that we ultimately ended up taking was dictated by the fact that I found flights to Las Vegas at very reasonable prices for four of us to fly, and Joe and I had both been to Vegas before, and felt that our kids were now old enough to appreciate what the desert city had to offer. (Like a roller coaster through our hotel). From there, we could easily travel to a few of the National Parks in Utah and Arizona and also make our way to the Grand Canyon.

With some exceptional planning – (Joe could seriously be a travel agent…) and some luck, which included two hotel room upgrades, one because our flight was delayed and we were so late getting to the New York New York Hotel in Las Vegas that they gave us a nice suite with a Jacuzzi and two televisions, (Sweet!) –  and the other because Joe is a Holiday Inn Express “rewards member” -who knew? We checked in at Moab, Utah, with a kitchenette, sofa, free waters, and complimentary granola bars. (We are high rollers, right?) – We had a seamless trip with two kids who traveled well and thank the dear lord, got along fine about 98% of the time.

So, here are my top 6 favorite experiences from the trip:

6. Everything in the Desert is named after the devil: Some of the places that we passed in our travels had the most interesting and at times kind of threatening names – including: Buffalo Sage Bed & Breakfast, Hell’s Backbone, Box Death Hollow Wilderness, Monument Valley, and Mexican Hat – among many others. Shannon was pointing out that many of these places had “hell” or “devil” in their titles, and we responded that if she were a pioneer and came to this desert without knowing how hot it would be, or how harsh the conditions were, wouldn’t she name everything as if were from hell too? Uh, yeah.

5. Trading Posts. There were just so many. The Blind Coyote was my personal fave, but they were everywhere. You have to love these overflowing retail establishments brimming with Indian Jewelry, dream catchers, tacky postcards that say: Howdy from Arizona with googly eyes on a cactus, obligatory arrowheads, spirit animals, and the greatest assortment ever of Buffalo hot sauces and “cactus candy” – which I sincerely hope is not real cactus, because that might end unhappily for some poor child.

4. Families have different eating habits: Or, rather sometimes, not eating. My husband eats one meal a day. Yes, that’s right. This is not because he has some vain desire to be very thin, it is just the way he is. To his credit, he doesn’t necessarily begrudge that the rest of us who have to eat more frequently than that, but he occasionally shrugs with confusion when 5 hours after lunch, I might be complaining (just a little) that I would like to eat dinner. The true discovery for me on this trip was that Shannon is actually very similar to him. If she had a fairly large lunch, there was no need for her to eat dinner. So, one night in Las Vegas when the two of them were bewildered as to why Joseph (a growing 12 year old boy who eats oh, let me think. ALL THE TIME) – and I were starving at 7pm, we went ahead by ourselves and got “New York” hot dogs (yes, in Las Vegas) and enjoyed a conversation about soccer, basketball, and where he thinks he might like to go to college, while Dad & daughter lounged in the room, I suppose emptying out their hollow legs.

3. Car conversations: Put four people in a car for hours, and there are bound to be some good conversations, particularly when you have no cell service, no radio reception, and the very real concern about losing battery power of all electronic devices forces your teenager to shut everything down and talk to you! What did we talk about? I don’t even remember, but the point is it happened, and my kids are funny. And reasonably intelligent. And we could sit there and enjoy them without anything else to do, or anywhere to be except the next destination.

2. Our National Parks: They are unabashedly beautiful. I visited the Grand Canyon about 25 years ago, and it is immense, vast, and breathtaking. But I was so pleasantly surprised and overwhelmed by Arches National Park, which around every corner had another beautiful structure that was different from what we’d seen before. I couldn’t get enough of it. Or Zion National Park, where we didn’t actually do much hiking, because the kids had such fun mucking around and playing in the Colorado River, exactly the moments we’d hoped for – spontaneous, non scheduled, just enjoying the moment. 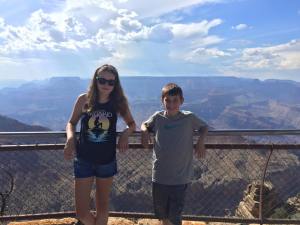 1. Everyone’s a comedian: You know those famous family quotes. We acquired some new ones.

Shannon: “Is there going to be an actual town at some point? Instead of just these ghetto trading posts?”

Joseph: “Arizona is just one long straight road. With some mountains. Look. There are some more mountains. Great. Haven’t seen those before.”

There it is. The long road. With some mountains.

Joe: (As we were leaving to drive across Utah, from Zion National Park to get to Moab, which is roughly was the same amount of time as if we were driving from New Jersey to Maine.)  “Ok, guys, this is going to be a long-ass drive, but then we don’t have to go anywhere for two days.”

Yes, I woke up each morning and thought to myself, things are going so well! After which I would immediately think: Stop thinking that! But the reality is, it did go well, even when on the first day our Jeep Compass wouldn’t really go into gear properly and going up hills made the engine sound and feel like a lawnmower was powering the car – but we figured that out eventually. I would rank this in my top 3 best vacations of all time.

That’s not to say we didn’t have our less than perfect moments. Joseph quoted the sign in the restroom at Arches National Park, where we had been walking around in 100 degree heat all day, to Shannon: “It says if you are irritable and tired, maybe you need to drink more water…” which prompted her to spit her water all over him…yeah, Joe did the yelling and I walked away pretending I didn’t know them.

But there were lots of laughs, as well as fun discoveries – like the town of Bedrock with all the Flintstones in the middle of nowhere, we got to sleep in a tent under the Desert stars, we drove on twisty, windy roads through amazing scenery where Shannon told us her hands got sweaty because of he elevation, and all the “Dam” jokes at Hoover Dam. While they certainly didn’t love everything, that was also the point of this trip. They dutifully allowed me to take all the photos I wanted, they smiled and posed, and let me enjoy them – which is what family vacations should be all about. Yes, we took our kids on a road trip – and had a great time! 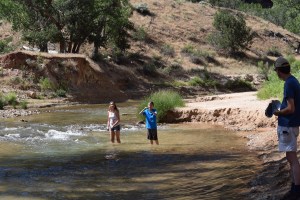 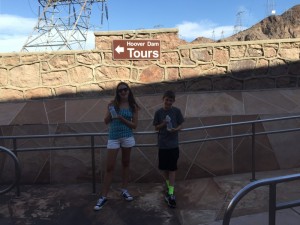